Read More
Without the Hot Air

This project started out as a personal investigation into the climate crisis and what we can (and should) be doing about it. The aim was to document and share a path through this topic rather than to offer anything original.

It is heavily inspired and influenced by David Mackay’s Sustainable Energy without the Hot Air which we read soon after it came out in 2008. This brilliant book is still a go-to despites its age.1 In particular, his factual approach and the “you only understand what you can create for yourself” mentality. Of course, this effort is much more modest in scope (and capacity). Nevertheless, we hope it proves of value.

We use the following rough conceptual model for thinking about the climate crisis and policies to address it.

Reading IPCC reports, it appears that the greatest efforts — and the greatest certainty — is around steps two and three: documenting GHG emissions and their link to climate change.

My intention, for the present, is to focus on these: to gather the best summary data on these two areas and set it out in a simple and compelling way.

Later one could expand in two directions. First, backwards into the causes of GHG. In particular, what is the composition of energy production and use and how could that change.

Second, forwards into the impact. The impacts is ultimately what matters but also the area where there is the greatest uncertainty. Right now we could focus on some of the things that have already been happening: the increasing number of forest fires, the growing number of extreme weather incidents etc. Just documenting them and assigning some probability score would be useful.

Global temperatures have been rising, especially since 1980, relative to historical norm and this seems to be accelerating.

What do we need to do?

What emissions reductions do we need?

We have a remaining carbon budget of max 420 GtCO2 (from 2018). This implies reducing emissions to net zero by 2050 assuming rapid reductions now — or much earlier if significant reductions dont’ start now.

As of 2021, we are not following that pathway and hence net zero should already be earlier and reductions must start now and fast.

Cumulative CO2 emissions are kept within a budget by reducing global annual CO2 emissions to net zero. This assessment suggests a remaining budget of about 420 GtCO2 for a two-thirds chance of limiting warming to 1.5°C, and of about 580 GtCO2 for an even chance (medium confidence). The remaining carbon budget is defined here as cumulative CO2 emissions from the start of 2018 until the time of net zero global emissions for global warming defined as a change in global near-surface air temperatures. Remaining budgets applicable to 2100 would be approximately 100 GtCO2 lower than this to account for permafrost thawing and potential methane release from wetlands in the future, and more thereafter. These estimates come with an additional geophysical uncertainty of at least ±400 GtCO2, related to non-CO2 response and TCRE distribution. Uncertainties in the level of historic warming contribute ±250 GtCO2. In addition, these estimates can vary by ±250 GtCO2 depending on non-CO2 mitigation strategies as found in available pathways. {2.2.2, 2.6.1}

Note that reading this carefully it is clear that electricity (white area under the graphs) is net-zero much earlier than 2050 by 2030 or 2040. That means a complete transition to net zero green energy in the next decade! This intuition is borne out by this next figure:

If you focus on light blue and dark blue one sees that electricity has carbon intensity at or close to zero by 2030. Note that most models don’t assume 100% renewable but rather increasing renewable plus carbon capture and storage for fossil fuel plants still runing. (“The share of energy from renewable sources (including biomass, hydro, solar, wind and geothermal) increases in all 1.5°C pathways with no or limited overshoot, with the renewable energy share of primary energy reaching 38–88% in 2050”) 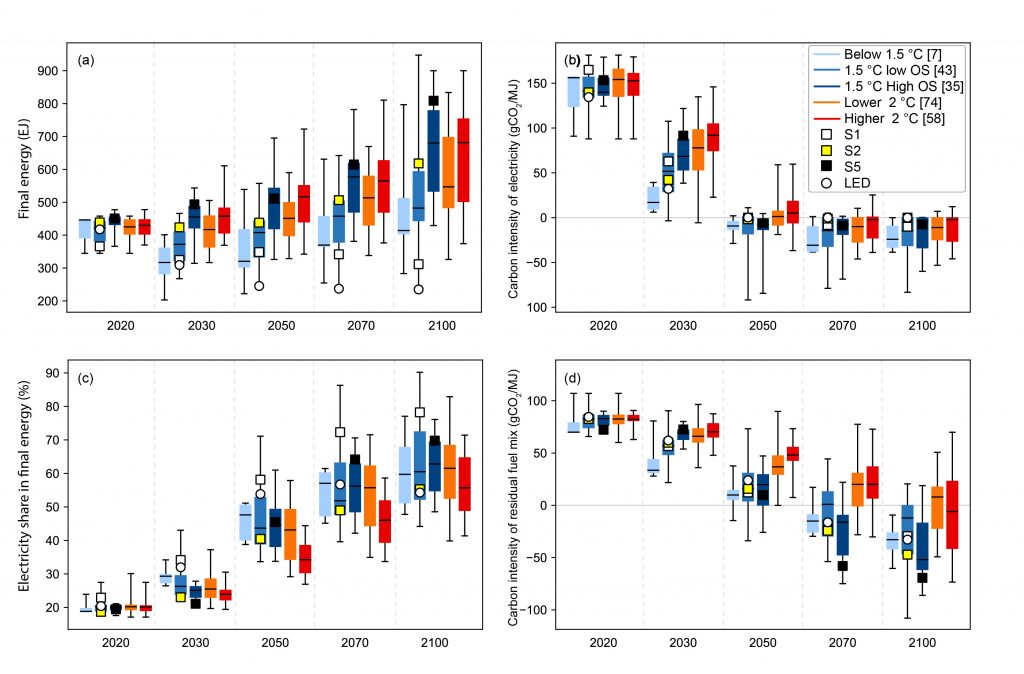 What options are there for doing that?

Can we get enough from Solar (alone)?